Do it in order, or make your own way around Sheffield’s city centre. It’s your party. Venues listed A to Z.

Brewdog
Brewdog’s Sheffield branch, in keeping with the brewery’s mantra, focuses on flavoursome upfront hop forward beers which is showcased via its 15 to 20 rotating keg lines. A glass walled keg chilling room; a viewing wonder. Now serves pizza and has a bottle-shop.

The Crow
This pub still may show as The Old Crown Inn on Scotland Street but the team behind The Rutland have now taken on the pub and renamed the snug pub and B&B to The Crow. Find a tasty keg and cask selection, often the odd Belgian beer and sour style gem on the bar.

The Old House
This eclectic Division Street bar offers hand pulled ales and many a continental beer on taps and bottles. Dig into the extensive bottled beer range and beer cocktails as the party vibe progresses. It has recently undergone a refurbishment with added gin and vermouth offerings. A considered food selection specialising in handmade pies.

Hop Hideout
A specialist little beer gem which used to be tucked away opposite The Broadfield pub (beershop and tasting room) along Abbeydale Road. The venue has moved to a new site in the city centre of Sheffield, in Kommune foodhall, which is based in the old Co-Op building. The beer shop usually holds over 200 beers, 25 ciders and has 4 keg taps offering draught beer to enjoy drinking in or to take out on growler fills. Belgian beer and wild ale specialists. Known for hosting regular ‘meet the brewer’ sessions and tastings in their intimate beery space. Friendly and knowledge staff.

Industry Taproom
Just a short walk away from The Rutland pub and handily on the way to The Beer Engine too (or vice versa, depending which way you walk!). Over 20 keg taps, with a good amount Lost Industry brews and lots of choice across beer styles. Check social media for opening hours. A friendly family run taproom.

Red Deer
A constantly rotating beer range, 300 ales poured over the last two years, board games (Kerplunk) and a powerful Sunday roast all add up to make this an attractive and cosy beer hang out. 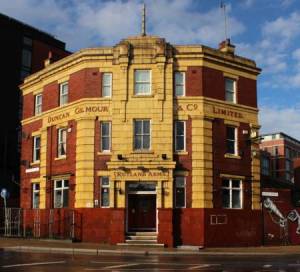 Triple Point Brewery
Launched in March 2016 as Sentinel this brewhouse and taproom housed in a converted industrial unit (near BBC Radio Sheffield and within walking distance from the central train station) brought a new angle to the Sheffield beer scene. Now under new ownership and renamed as Triple Point Brewery, the focus is still on their brewery fresh beer. They also offer great vegan food options from residents the Twisted Burger Co. Big outside seating area. 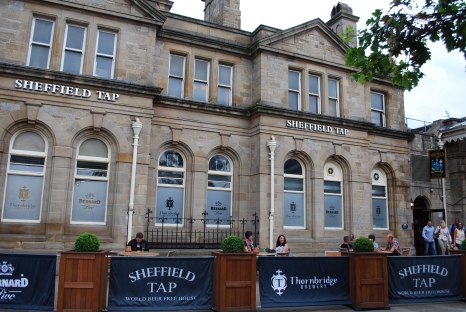 The Three Tuns
The Three Tuns is an intriguing flatiron architectural shaped pub. Favourites on the cask lines include Abbeydale, Acorn Brewery and Titanic.

A beer and food lover’s paradise.

The Bar Stewards
Welcoming micropub opposite Shakespeares offering a range of craft beers and friendly chat. Check the website for opening hours before heading down.

Church
Home of Drop Dead Clothing and Sheffield band Bring Me The Horizon, find a craft beer offering and vegan food from Make No Bones. You can also geek out on the arcade games.

Craft and Dough
Part of the Milestone group, Craft and Dough is all about pizza and beer. And they do both very well. Beer wise, it’s all about the bottles and their extensive list boasts over 50 varieties from America, Europe and Asia.

Fat Cat
Nearly thirty years ago the Fat Cat introduced Sheffield to the concept of a constantly changing range of guest beers, and this is still the philosophy of the pub today. As the Kelham Island Brewery tap, you’ll find their Pale Rider and Best Bitter regularly on the bar – along with a great selection from around the country. Great beer garden. Situated next to the Kelham Island Brewery.

The Gardeners Rest
A community owned pub with a beautiful and arty back garden over-looking the river. Friendly and convivial, often hosts quizzes and poetry evenings. (Neepsend/Kelham)

Harlequin
Here you’ll find 14 hand pulled ales including their house beers (from local brewery Exit 33) and a constantly changing range of guests from craft breweries across the country. Often wins the CAMRA crown of best local real cider offering, if you fancy a break from all that lovely cask ale.

Kelham Island Tavern
The Sheffield CAMRA Pub of the Year multiple times has 13 ales on the bar – including milds, porters and stouts. Local regulars include now linked brewery Blue Bee, Abbeydale’s Deception, Acorn’s Barnsley Bitter and Bradfield’s Farmer’s Blonde. Superb pork pies available at the bar to pair with your glass of ale.

The Old Workshop
A converted industrial open plan room with exposed brick and artistic touches making it a relaxed space to chill and enjoy the selection of independent beers on the keg wall. Often has DJs and live music.

Riverside
Six rotating ales including house brews from True North Brew Co. Not forgetting up to thirty five World, Belgian and bottled beers in the fridges and a complimentary mix of German Pilsners and Belgian wheat beers on tap. Large beer garden with area over-looking the river. Gourmet pub pies on the menu.

Shakespeares
This gateway to the beer-torious Kelham Island beer trail houses 18 taps split across cask and keg. Abbeydale Brewery’s Deception 4.1% is the regular ale and American guest beers feature heavily on the five crafty keg taps. The bottle assortment hits the 50 plus mark – look out for some exclusive rarities. Grab a sustaining 90p cheese butty from the bar (if you’re lucky enough to find any left!).

Because some pubs, bars, micro pubs and beer shops are worth the effort.

The pubs listed below are in varying residential areas of Sheffield (Ecclesall, Netheredge, Kelham Island, Broomhill, Abbeydale and more), all with good public transport infrastructure and not far in a taxi ride!

The Ale Club
Adding to the micro-pub trail on Eccy Road, this laidback and friendly spot is run by the team behind The Brew Foundation. Sit in the window and watch the world go by. (Ecclesall)

The Bear
Newly opened beer emporium in 2021 along Abbeydale road, towards The Cremorne pub. Drink in and take out available. Six keg lines to choose from. (Abbeydale)

The Beer House
Sheffield’s original micropub houses just 40 drinkers but they are well provided for with six hand-pulls. Focussing on Sheffield’s breweries you can expect to find Blue Bee, Bradfield, Stancill and Abbeydale in top form. (Ecclesall)

The Beer Engine
An ideal starter pub to begin exploring the Abbeydale and Heeley beer routes. Try their small plates and tapas offerings such as pan fired chorizo or spicy Korean chicken wings alongside a mighty fine beer. (London Road)

The Closed Shop
Sitting opposite the Hallamshire House on Commonside the pub is now run by Stancill Brewery. Expect to find a host of Stancill beer on cask and a guest selection to boot. A warming ‘proper pub’ food menu has reinvigorated the venue recently, look out for vegan dishes too. Eight handpulls, four ciders and an intimate garden. (Walkley)

Dead Donkey
A new neighbourhood bar run with a good selection of keg lines and cheese toasties. You can find a bangin’ cocktail too (just saying!). (Abbeydale Road)

The Itchy Pig
Micro-pub based in vibrant Broomhill, with an eclectic mix of locals and students. Focus on cask ale and convivial conversation. The penny bar is (Broomhill)

Jabbarwocky
Once a Polish bar, new ownership and a name change bring a fresh focus. You can still find your fav Polish lager but now too a great craft beer offering and dumplings on the menu. (London Road > Abbeydale)

Picture House Social
Head to the bar and you’ll find three hand-pulled guest ales. Newly added is a shuffleboard games room with a focus on American craft beer. Plus dive into the pizza and arancini offering from the Italian street food diner menu. Specialising in cocktails and late night dancing vibes. Outside terrace sun trap. (Abbeydale)

Turners Bottle & Tap
Originally a beer shop, a drink in element was added latterly – inside cosy area plus a couple of tables outside. 4 draught beers (keg lines) usually available. (Abbeydale)

Two Thirds
Craft beer bar newly opened in late 2019 along Abbeydale Road. Outside seating and regularly changing beers on tap. Plus kitchen take over from Get Wurst who specialise in currywurst and bratwurst in addition to those cheesey Raclette chips you just can’t get enough of. (Abbeydale)

The Wellington
A Neepsend Brewery pub at Shalesmoor tram stop on route to Kelham Island. Lots of snug like rooms and friendly bar staff to help you choose the perfect ale.

The White Lion
A friendly atmosphere and music orientated local pub with a focus on well-kept ales and live music. Usually have a vegan friendly beer on draught. Tiled exterior, snugs in front and good conversation at the bar. (Heeley)

The York
The bar boasts seven hand-pulled ales from the finest breweries across the UK including some local to Sheffield. A world beer bottle selection covers Japan and Iceland and there’s a section dedicated to Germany, Belgium and America too. (Broomhill)

One thought on “Recommended Pub Trails”